The AAMC will host a free interactive discussion with Dr. Owen Garrick, President and CEO of Bridge Clinical Research about the effects of diversity in health care among African-American men in the United States. “Does Diversity Matter for Health? Experimental Evidence from Oakland,” on April 25 at 1:00PM Eastern. In the February edition of USA Today, new research data from the AAMC highlighted there has been a small increase of medical students from 5.6% in 1980 to 7.7% in 2016 who identify as Black or African American, but the increase is still less than the 13.2% in the general population. 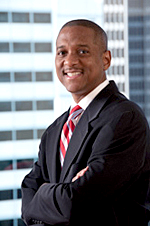 Owen Garrick, MD MBA is President & Chief Executive Officer of Bridge Clinical Research. At Bridge Clinical, Dr. Garrick, has P&L for the Clinical Trials, Research Analytics, Health Services Research and Healthcare Communications business units.  Bridge Clinical is a global private equity-backed contract research and health communications firm focused on drug development, scientific advancement and patient engagement. It is active in multiple therapeutic areas including anti-infectives, autoimmune, cardiovascular disease, endocrinology and oncology.  Since 2009, therapies that it has helped developed have generated more than $6 billion in revenues. In addition to profit & loss responsibility for the business units, Dr. Garrick has oversight of all financial, administrative, and legal aspects of the company, and serves on the Board of Directors. He led Bridge Clinical’s expansion into multiple therapeutic areas, launched the public relations arm and represents Bridge Clinical at the US Food & Drug Administration. Dr. Garrick joined the company as Chief Financial Officer and previous to assuming his current position was COO of the company.

Prior to joining Bridge Clinical, Dr. Garrick was Director of Strategy and Business Development at McKesson Corporation, the leader in drug distribution and health information technology. Some of his key accomplishments included the $450M acquisition of D&K Healthcare which involved due diligence, negotiations and FTC clearances. He also led the launch of McKesson’s Generic Drugs Telesales Business Unit, the development and launch of McKesson’s Drug Adherence Business and the expansion of the pharmaceutical packaging business.

Before joining McKesson, Dr. Garrick was Global Head of M&A Negotiations at Novartis Pharmaceuticals. In this position he oversaw small and medium size company acquisitions, equity/license right deals, mature product divestments, and venture investments in biotechnology companies. While at Novartis, he pioneered the contingent payment deal structure with the $465 million acquisition of Idenix Pharmaceuticals which launched Novartis’ Anti-Infectives business unit. This structure has become an industry standard tool in life sciences deals.

Dr. Garrick’s experience also includes positions at Goldman Sachs as an investment advisor working with private healthcare companies as they sought to grow, raise capital, and perform initial public offerings and Merck & Company where he authored the first commercial analysis of Human Papillomma Virus vaccine (Gardasil) which has had peak sales of $1.6 Billion.

Dr. Garrick is a nationally recognized leader in the field of research and research ethics. He was confirmed and completed a term as a member of the Department of Health and Human Services Advisory Council on Human Research Protections from 2012-2016.  He has co-authored industry advisory documents around biospecimen data security and patient engagement in research and currently serves on the board of Professional Responsibility in Medicine & Research (PRIMR).

Dr. Garrick is also on the board of the New York Blood Center where he serves on the M&A Committee. He is Secretary of the board of the American Psychiatric Association Foundation and was Vice Chair of the Board of Regents of Samuel Merritt University. Previously, he served on the $6BN Bay Area Division of Sutter Health, the board of Quorum Review IRB where he chaired the Compensation Committee, the board of the American Medical Association Foundation where he was Board President and Context Matters Inc (acquired by Decision Resources Group). These entities yielded double digit annual growth during his involvement.

Dr. Garrick earned his MD from Yale School of Medicine and his MBA from Wharton School of Business. He holds an AB in Psychology from Princeton University and resides in Oakland, CA with his wife and three sons.

Learn from experts from across academic medicine each month about how to foster inclusive environments and create and promote equitable, antiracist policies, education, and institutional practices.